Duncan Lamont, who has died at the age of 87, was a songwriter, composer, arranger and saxophonist who swapped the shipyards of Greenock for the jazz clubs of Soho in the 1950s, and forged a unique career which continued up … Continue reading → 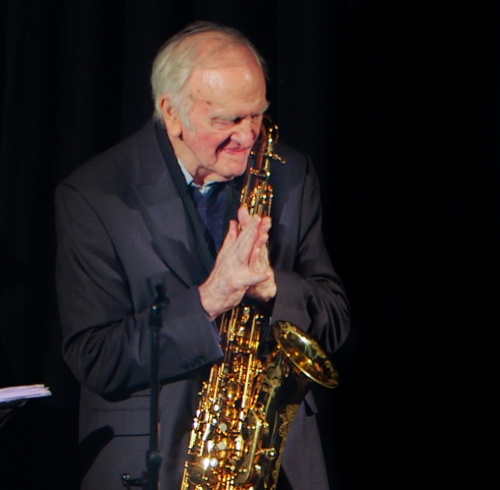 Duncan Lamont, who has died at the age of 87, was a songwriter, composer, arranger and saxophonist who swapped the shipyards of Greenock for the jazz clubs of Soho in the 1950s, and forged a unique career which continued up until his death just hours after he played in a special concert of his music at London’s famous 606 Club.

A particularly generous and modest man who was held in high esteem by his fellow musicians, Lamont was especially well loved by singers who appreciated his gift for producing songs which told stories or painted vivid scenes. A prolific songwriter, who still aimed to produce a song a day well into his eighties, he wrote numbers which were recorded by some of the most revered names in jazz, among them Cleo Laine (who ended her Carnegie Hall show with his Not You Again) and Blossom Dearie, herself a gifted songwriter.

Just last month, he brought a show celebrating his songbook – featuring his regular collaborators, the singers Esther Bennett and Daniela Clynes, plus a Scottish rhythm section – to the Beacon Arts Centre in Greenock.

Lamont also penned orchestral suites, such as The Young Person’s Guide to the Jazz Orchestra and The Sherlock Holmes Suite, in collaboration with his great admirer Spike Milligan. He also wrote music for TV, most famously the children’s classic Mr Benn and the cop show The Sweeney.

For more than two decades, he was also the featured saxophone soloist in British bands accompanying such illustrious visiting stars as Frank Sinatra, Tony Bennett, Peggy Lee and Bing Crosby, or being led by such greats as Count Basie, Benny Goodman and Henry Mancini. For 11 years, Lamont led a band himself to raise money for cancer research.

Duncan Lamont was born in Greenock in 1931. His father worked in the torpedo factory in the shipyards, and the family was very musical. In a BBC interview last year, he recalled: “My family talked about music all the time.” His father and one sister played accordion; another sister was a champion dancer, and at the age of seven, Duncan took up trumpet, chosen because “it was the cheapest instrument I could get – it cost 30 shillings”.

During the war the family was evacuated, and Lamont’s first trumpet lessons were with a teacher in Troon. “He was terrible, but I didn’t know it at the time,” he later said. After the war, the teenage Lamont began to travel to Glasgow every week for lessons with the “wonderful” Jimmy Young who immediately realised that the boy destined to become his star pupil had not learned to read music at all with his previous teacher.

Lamont began to play gigs with local dance bands, and was soon leading the life of a musician rather than that of a school boy. “I’d be up till about five in the morning, so my mother often didn’t send me to school at all.” A crippling lack of self-confidence plagued Lamont in his early years – even after he and some friends came second in a Melody Maker contest and he was offered a job with a top London jazz band.

“Being invited to join Kenny Graham’s Afro Cubists was like being offerd a Hollywood contract,” he recalled, “but I turned it down because I was too frightened.” He went back to work at the shipyards but received regular telegrams from Graham imploring him to change his mind, until one day, he did just that. “I always felt there must be something better than the shipyards, but I felt I was doomed to work there.”

In London, Lamont switched to tenor saxophone, and made his first recording (“I was absolutely petrified!”) with Edinburgh-born Johnny Keating’s band, in 1957. Entitled Swinging Scots, it featured an all-star line-up entirely comprised of some of the talented musicians who had already migrated from north of the border, including the likes of George Chisholm (trombone) and trumpeters Jimmy Deuchar and Tommy McQuater.

Lamont soon added flute and clarinet playing to his skill set and rose through the ranks of session musicians to the point where he was regularly called upon to play, often as a featured soloist, with American stars when they toured or recorded over here. Marlene Dietrich and Sammy Davis Jr were two of his favourites, while Fred Astaire inspired Lamont to write a song. The thank-you letter he received from the debonair song and dance man became a treasured possession.

Despite having a diary that many freelance musicians could only dream of, Lamont found some of these high-profile gigs daunting and seems to have suffered from what’s now labelled “imposter syndrome”. He later said: “I coped but I didn’t want to do it through drink or drugs so I tried yoga. And within a week it transformed me. I became like a different person, more relaxed, more outgoing.”

Perhaps it was yoga that emboldened Lamont when, after 19 seasons of playing for Frank Sinatra, he – along with the rest of the band – was offered a significantly reduced fee for the usual amount of work. Finding that everyone else had accepted the pay cut, Lamont took the gig but when he realised that his old black evening suit needed to be replaced, he decided that Sinatra wasn’t paying him enough to justify a shopping trip, so he opted to make a silent but visual protest – by wearing a brown evening suit. When Sinatra’s fixer got in touch with him the following year it was to ask if he had any idea why had been told never to book Lamont again..

Other 20th Century music greats – among them the arranger/composer Gil Evans – were won over by his talents as a composer. Sammy Cahn, who wrote many of Sinatra’s favourite lyrics, wrote an article on Duncan Lamont, and said: “It makes me very happy that people are still writing songs like I Told You So.” That song – written from a woman’s point of view – was recorded by a string of diverse singers, including Natalie Cole and Cleo Laine, and featured on Tomorrow’s Standards, an award-winning CD of Lamont’s songs, released in 1994.

British singer Tina May, who appeared at the birthday show at the 606 Club last week and who is going ahead with a planned CD of Lamont’s songs later this year, says: ““Duncan had an uncanny sensitivity and witty insight when writing songs. I find his lyrics and his melodies very catchy and a joy to sing. Each song is a little vignette and they are sometimes quite challenging; Manhattan in the Rain, for example. A consummate jazz player, Duncan was a song writer with an exceptional sense of groove, melody, sophistication and internal rhyming structures – which created the feeling of a very well crafted ‘standard’.”

Lamont, who was predeceased by his wife Bridget, is survived by his sons Duncan Lamont Jr and Ross, and four grandchildren.

Duncan Lamont (left) and friends in Greenock in the 1940s